A Machine Translation future is not "just around the corner" 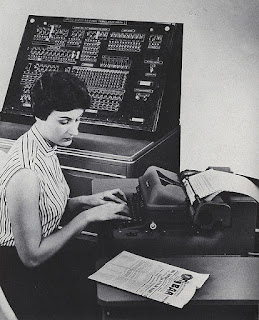 Above via Flickr: Translating Machine. Typist copies story from Russian newspaper Pravda on special machine which converts Russian letters to punched holes in paper tape. Insertion of the tape into another machine produces translation. By the 1970's, automatic translation of practically all foreign publications and books will be routine. (from 1975: And the Changes To Come by Arnold B. Barach)


Note this fascinating update from the localization blog "Global Watchtower" (confusingly named as if it was a Jehovah's Witnesses site): At TAUS, Practitioners Settle In for a Long Slog

…At one point, Jaap van der Meer made the provocative statement that MT would see “no new breakthroughs” in the next five years…

This is a stunning admission from these people! And interesting that the efforts at machine translation is still so fragmented. Lots of players are trying to invent the wheel independently because they all want to be first to make a big killing by eliminating the lowly translator.

People on the production side of the localization industry (the people who are DOING the jobs that salesmen sell) often find that translation is the smallest and easiest part of any project.

The key to a successful project is: being able to synthesize legacy files from a client uninterested in being part of the process, integrating last minute on-the-fly changes from a client CEO who just "wants it done," and the knock-on effects that these inevitable challenges bring to a project schedule.

The real challenge for the localization industry in the short to medium term will be cutting the massive costs of bricks and mortar client-facing operations in Europe and the U.S.--along with dealing with increasingly savvy corporate customers trying to break the middle-man syndrome of MLVs based in major markets.
Posted by Admerix at 7:11 PM No comments: