We have been receiving fake Euro translator resumes coming in via email several times per week. There have been 14 in the month of April alone. When you pick out any distinctive phrase from the resumes, you can invariably find this phrase has originated from Translator Cafe or Traduguide. The mails are always sent to “undisclosed-recipients” but would seem likely that any company or agency listed with the above two industry websites would be receiving them.

* They are almost all porporting to be PFIGS linguists with the occasional Arabic resume turning up among the spamming emails.
* They all have Word documents attached with a name that follows the same format: “CV_Firstname_Lastname.doc” and this sometimes has the language in the name as well.
* All the emails are Gmail addresses and frequently have “2000” in the email name.
* Particularly significant is that the attached CV documents all have exactly the same info in the properties which would indicate that they are all originating from the same computer.
AND, most interesting, all of the info in the CVs is cobbled together from online profiles on Translator Cafe or Traduguide.

Below are a selection of these auto-generated resumes: 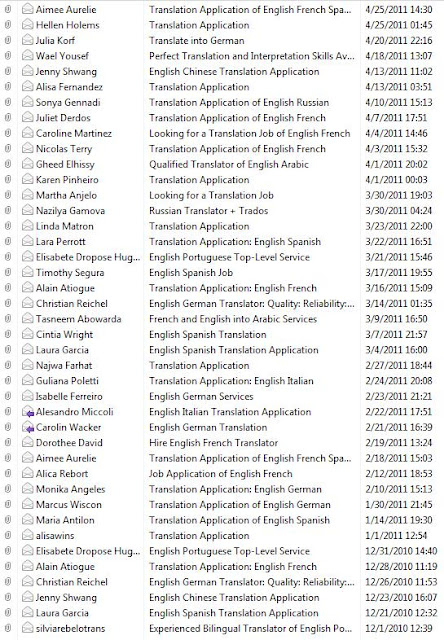 All the emails are formatted the same and the email text is clunky for English (“I am honored to enlighten you with my great passion for being in your service 24 hours a day, carrying out all your translation projects and strengthening our business through the effective and dynamic cooperation in this field.”)
We started writing to each one—most never answered.
Finally, a couple answered, but none would sign and return an NDA or provide any additional information.
We just received this reply over and over:
dear,
I am available you can kindly send me the file.
We don’t know what this means, but we thought we would pass it along: some sort of automated program grabbing online info about linguists and creating emails and resumes for them to solicit work from MLVs.
The real mystery is what is the intent and goal of the people behind this spamming out to Language Service Providers. The emails themselves and the resumes attached seem harmless enough. This has been going on since at least December last year and does seem to be increasing in frequency but always different email addresses, and different content on the body of the emails and in the resumes, but still always following the pattern described above.
Posted by Admerix at 5:11 PM